Some time ago a friend told me that writing my posts in English would be a good idea to reach more interested people and to improve my English skills. So it is time to start writing in English.

The core dump is a snapshot of the crashed process memory (with some processor’s info). It is a valuable tool to understand what generated the crash situation.

How to get the core dump

You must compile your application with debug symbols in order to get some useful information. Adding the debug parameter (“-g”) to the GCC compiler will generate these symbols for you.

This feature is usually disabled on most of the Linux distributions because the core dump files take space on the memory. The easy way to enable it is by running the following command on the target:

This command sets the size of the core as unlimited. Use this command to disable it:

The application must receive a signal from the kernel to generate the core file e.g. a segmentation fault. You can find a list of those signals in the signal man page.

Compiling this code with arm-linux-gnueabihf-gcc test.c -g -o test and running it on the target will generate the following message:

Go to the core man page to understand the name that will be generated and all “%” specifiers.

How to debug the core dump

Now with the core file in our hands, let’s see what it has inside it. GDB is a perfect tool to analyze it. Run the GDB from the toolchain that compiled the source code to open the core file. Sometimes “gdb-multiarch” works fine. 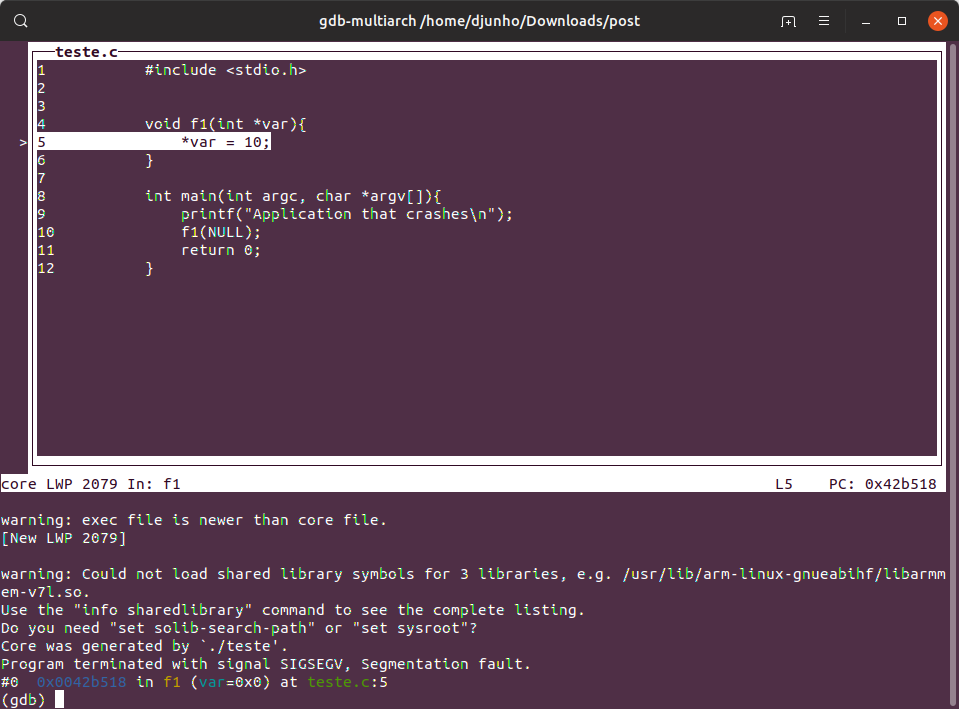 As you can see, it shows the exact line in which the application crashed. You can navigate through the GDB to see other useful information such as variables and the backtrace. But, this will be the subject of another post.